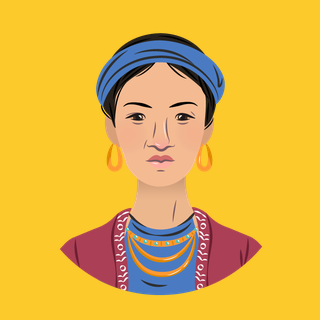 Trưng Trắc was born during a unique time in Vietnamese history when women could inherit land and become important figures — eventually forbidden in later centuries. However alongside those liberties she and her sister, Trưng Nhị, also witnessed the abuse on the Vietnamese people by the Chinese governor, Tô Định. These auspicious times lead the Trưng sisters into studying martial arts and warfare strategies from their father, a military chief and adviser to the Chinese dynasty. The whole Trưng family and other lords including Trắc’s husband, Thi Sách, loathed the Chinese’s political domination of Vietnam and the ever increasing taxation imposed on their already drained nation. Uprising plans inevitably ensued, and Thi Sách made a stand against the Chinese after they started strongly enforcing restrictive policies. Getting wind of their rebellion, Governor Tô Định quickly ordered the public execution of Thi Sách.

The murder of Trắc’s husband was the catalyst in her decision to declare war against the Chinese. Nhị supported her sister and was more that willing to join her cause for independence. Their unwavering bravery and mastery of weaponry allowed them to rally Vietnamese lords and peasants alike. Securing an army of 80,000 people, lead by 36 women generals, including the Trưng sisters’ mother. Their skilled army and strategic battle tactics gave the Trưng sisters an upper hand against their enemy. Within a couple of months they were able to take 65 fortresses, driving out the Chinese. Trưng Trắc was declared “Trưng Vương” or “She-King Trưng,” and ruled alongside her sister for three years. During her reign she abolished the taxes imposed by the Chinese and tried to restore a simpler government with more traditional Vietnamese values, all while constantly fighting off the Chinese army.

In 43 A.D. Trưng Trắc’s rule quickly came to a close at Hat Giang River. She and her sister were defeated in battle by a massive and well-equipped Chinese army. General Ma Yuan was sent by the Emperor with 10,000 troops and supplies amassed over the last year. The rebellion was cleared out and Chinese rule was restored, imposing assimilation once again.

There is much conflicting debate on the death of Trắc and Nhị in Vietnamese and Chinese records. In Vietnamese lore it is believed the Trưng sisters committed suicide by jumping in the Hat Giang River rather than be taken prisoners. The Han historians claim they were indeed captured and decapitated. Still, both countries considered them formidable forces and acknowledged Trưng Trắc to have a “brave and fearless disposition.”

Being the first to lead a resistance against 247 years of Chinese domination, the Trưng Sisters are highly revered national symbols in Vietnamese culture, with shrines and sculptures throughout the country. For some they showcase a strong matriarchal influences in ancient Vietnamese society before the Chinese conquest transitioned them to a more patriarchal social structure. And even though their rebellion against the Chinese happened almost 2,000 years ago, Trưng Trắc and her sister still strongly represent independence in Vietnam.

Most of the soldiers in the Trưng Sisters’ army were female. It is believed this inspired many women during the Vietnam War (aka Second Indochina War) to take up arms.