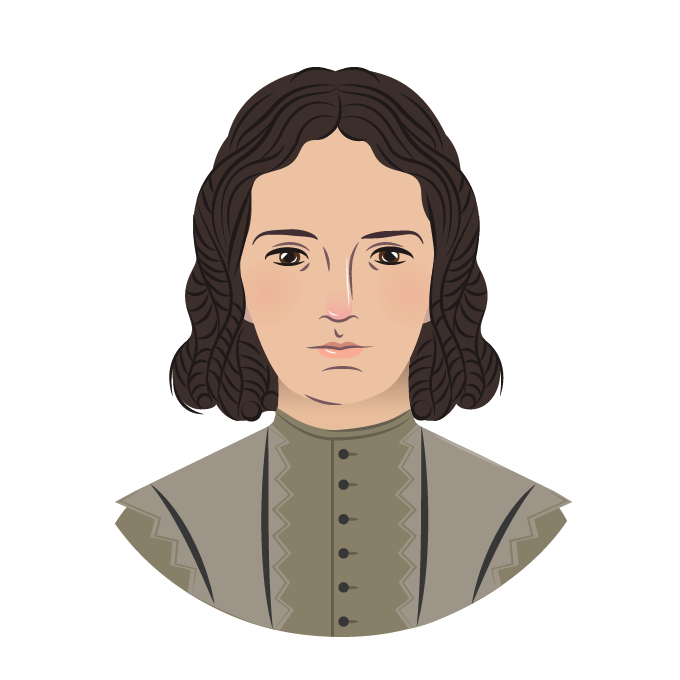 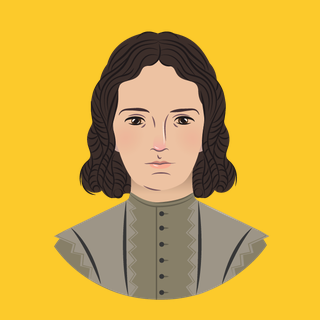 Nísia Floresta Brasileira Augusta was born in the rural town of Papari, Rio Grande do Norte to a Portuguese father and Brazilian mother. Her real name was Dionísia Gonçalves Pinto, but she so actively used the name Nísia that she is rarely referred to by her given name. Brazil was a politically volatile country during the 1800s and she was forced to move around frequently in her youth. In spite of this, her parents fostered a strong but informal education in her. Her father's Portuguese heritage contributed to much of the availability of education for her, but also the need to move as there was animosity in the region for "European interference" in Brazil.

In 1823, at thirteen, she was married to a land owning neighbor, but it's not known if this union was at her consent. Regardless, it failed and she returned to her family within months. They moved away shortly after. The aforementioned animosity became most evident when her father was assassinated in 1828 by a Pernambucan elite when she was eighteen. She married a law student named Manuel Augusto de Faria Rocha. While this relationship may have seemed necessary for financial support, her love for Manuel Augusto is evident in her endearing references to him later in her life.

After giving birth to her daughter, Nísia published her first work Direitos das Mulheres e Injustiça dos Homens (A Vindication of the Rights of Woman) -- the first feminist work of its kind in Brazil. Originally thought to be a translation of a text with the same name from English author Mary Wollstonecraft, it was discovered in recent years by historian Maria Lúcia Pallares-Burke to actually be a translation of "Woman Not Inferior to Man", an anonymous text on feminism published in London ninety-three years earlier. The piece used logical arguments to make a case for the equal capability of women with men in education, public office, and generally all levels of society. The original text's conclusion points out that it doesn't seek a revolt against men, but "only mean[s] to show my sex, that they are not so despicable as the Men would have them believe themselves, and that we are capable of as much greatness of soul as the best of that haughty sex." Shortly after publishing this her husband unexpectedly died only six months after their second child was born.

In keeping with her apparent beliefs in educating women combined with an increased need to support herself and her two children, she began operating a small school for girls. By 1837, the Ragamuffin War, considered the one of the bloodiest civil wars in the Brazilian Empire, forced her and her family (and mother and sister) to move to 1,500 km north from Porto Alegre to Rio de Janeiro.

In her new home, Nísia Floresta started over with her school and successfully established Collegio Augusto, named after her late husband. Here she began writing her own texts, educational in nature. The first of which was Conselhos a minha filha (Advice to my daughter) in 1842. This text was mostly information on how to raise children and worked in a sense as a "self-help" book, but is abundant with a sense of improving the "condition of women" and an acknowledgement that it will always be a struggle. Mary Wollstonecraft once again appears as an inspiration here as she had written a similar text in 1787. The rest of Floresta's writing from this time serves as both textbooks for her students and as advertisement for her school. Much of the script adheres to the social beliefs of the time, so as not to upset the patriarchal social conventions that funded her school, but with encouragement that her students not "waste their education". Conselhos even starts out by implying that her late husband laid out the education she is teaching for her daughter, in an attempt to imply that her curriculum comes from a man. Later writings reference him lovingly and tragically rather than in an authoritative way, showing her own growth in confidence and in the school as a business.

After running the school for six years, Nísia and her family moved to Paris. Reasons for this move are unclear, but the coincidentally Women's Rights movement was very active in Paris during the time as a provisional government was forming. She brought back a lot of that idealism when she returned to Brazil and published Opúsculo Humanitário (Humanitarian Booklet). Elevating her views beyond the view of simply Women's Rights, but more to that of Human Rights. She criticized Brazil's education system, treatment of women, use of slavery and mistreatment of the indigenous people. By this time, US and Brazil were the only remaining countries that perpetuated slavery. Several of her short essays and pieces of fiction appeared in the periodical O Brasil Illustrado in 1855 and 1856, including a piece of prose fiction about a devout Christian slave modelled on Beecher Stowe's Uncle Tom's Cabin.

As if Nísia didn't have enough tragedy in her life, in 1849 her daughter had a severe fall from a horse, and they returned to Europe at the suggestion from doctors that the "European air" might help her recovery. While dealing with and writing about her grief, she formed a friendship with the founder of Positivism, Auguste Comte, whose lectures she had attended during her previous visit. Her later works are greatly influenced by this idealism and take a more scientific and natural approach to feminism, which takes on a view of the "natural role" of women.

Nísia's ideals related to feminism were mixed with the ideals of Catholicism, the domestic role of women, and the virtues of being a mother and a wife. These views were necessary for the economic conditions of Brazilian society at the time, and she seemed to recognize this. Women were as capable as and equal to men, and while she believed they had their role to play in the familial sense, to relegate them to an uneducated domestic role was an injustice to both women and to a civilization's children. While she didn't speak strongly about the so-called "independence" of women, she continuously spoke out against the subjugation and lack of education available for women for all her life and successfully published these when no other Brazilian was. It influenced generations of Brazilian women and society during and after her lifetime.

The city of Papari was renamed to Nisia Floresta during her own lifetime. Her remains were sent from Europe when she died and interred at a monument there on her behalf.