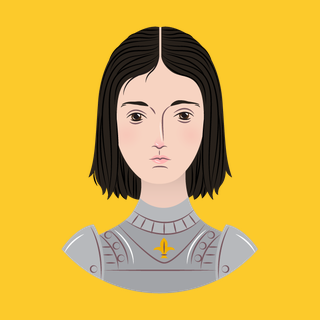 Joan of Arc was a young girl with a fresh perspective on the Hundred Years' War. France and England were battling off and on for the French throne. During her youth, the countries old wounds were opened up again. She found herself having visions of angels and saints advising her to be virtuous and go to church regularly. But it wasn't until she turned twelve that Joan claimed the Archangel Michael came to her and said she needed to go to France, take the city of Orléans back from the English, and restore France to Charles VII. Four years later, the sixteen year old obeyed her visions and started her quest.

Many did not believe her mission, but they were desperate for help. After a three week examination of her claims by a group of theologians she was taken seriously. Joan's pious behavior and eloquent speeches also helped establish her saintly reputation.

Boosting morale for the war, men willingly came to serve their cause. Her encouragement and tactics lifted the English siege on Orléans and changed the tides of the war. Over the next few months other victories were to follow, and Joan delivered the crown to Charles VII.

After the coronation Joan aimed to recapture Paris from the English. She was devoted to the people of France and wanted to help them escape. However, the lack of support from Charles VII, insufficient funds, a dwindling amount of supplies, and over confidence from French troops caused things to take a downward spiral. She no longer claimed any victories, and was eventually captured.

In 1431 the clergy at the University of Paris, which was pro-English, interrogated Joan of Arc. For fear of creating a martyr for the French they did not execute her immediately. She was imprisoned for months in a prison supervised by men where she faced constant threat of rape. Joan was unjustly charged for heresy, denied a legal adviser, and judged by an unbiased court who was politically motivated.

After the Hundred Years' War ended there was a retrial to investigate Joan of Arc's execution. In 1456 she was found innocent, and made a saint in 1920 by Pope Benedict XV. Her bravery, leadership, and devotion to the French people contributed to their escape from the English for some time. Even until her end she risked being called a witch and a heretic to do what she believed was right.

Very little is known about Joan's appearance because their was no portrait made while she was alive. However, there is some historical evidence in a couple of written documents from her trials. In these descriptions she is reported as a short, sturdy woman, with black hair. Her complexion was sunburned and she had a red birthmark by her left ear. Because this is all that is known about her appearance artists have taken the liberty to create various different renderings of Joan of Arc over the years.