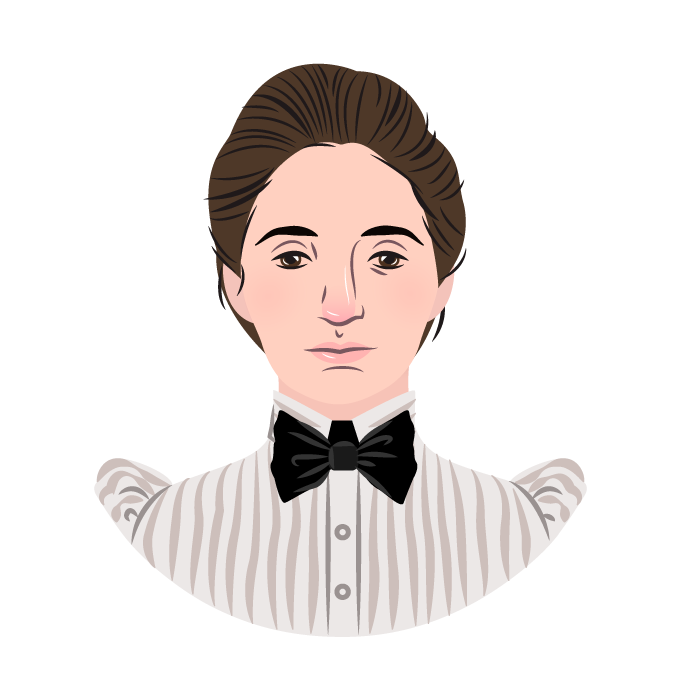 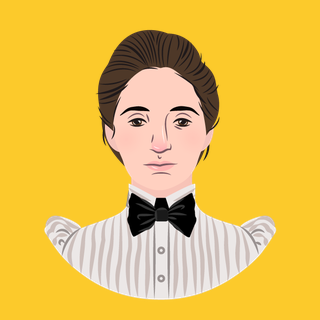 German-born Emmy Noether was given the name Amalie, after her mother, but came to be known by her middle name, "Emmy". Her father Max Noether was an esteemed mathematician and professor at the University of Erlangen.

Surprisingly Emmy did not study mathematics as a child. During that period in Germany, girls were not allowed to attend college preparatory schools, so Emmy was enrolled in a "finishing school" where she studied common social skills and the arts alongside other upper-middle class girls. In high school she studied languages, arithmetic, and piano. At eighteen she became certified by the State of Bavaria to teach both French and English at schools for young women. Emmy, however, decided to pursue a much more challenging road -- studying Mathematics at a university.

Women were allowed to unofficially study in German universities, but needed permission by each professor to sit in their course. Emmy was one of two women studying amongst thousands of men at the University of Erlangen. During 1900 to 1902 the university only allowed her to audit classes, meaning the courses did not carry any academic credit. Passing her final examinations in 1903 she became eligible to enter the University of Göttingen, but still as an auditor. Emmy sat in on lectures of leading mathematicians, but after a semester returned to Erlangen as the rules had changed. Women were now allowed to officially enroll as students like men. In 1907 she was the second woman to receive a Ph.D. in mathematics, and awarded the degree 'summa cum laude'.

Even though Emmy had earned a doctorate in mathematics, the University of Erlangen policy did not allow female professors to be hired. She was relegated to working as a guest lecturer, assisting her father at the Mathematics Institute in Erlangen without pay for seven years. Still, she continued her research in theoretical algebra and started to publish papers on her work.

Her papers spread in the mathematical community and she quickly made a name for herself. Her ideas in abstract algebra, essentially creating and finding relationships and ways to describe them, were exciting to mathematicians of the time -- those that could understand them. In 1915 David Hilbert and Felix Klein invited her to return to the University of Göttingen. Hilbert was working on physics related to Einstein's theory of relativity (which was not yet complete) and considered her an expert on invariant theory. Noether's Theorem came from these sessions. It states that if a system has a continuous symmetry property, then there are corresponding quantities whose values are conserved in time. Einstein wrote to Hilbert, "Yesterday I received from Miss Noether a very interesting paper on invariant forms. I am impressed that one can comprehend these matters from so general a viewpoint. It would not have done the old guard at Göttingen any harm had they picked up a thing or two from her." Her theorem is still relevant and applied by mathematicians, physicists, astrophysicists for many applications to prove complex relationships.

She remained at Göttingen after publishing her findings and moved on to ideal theory and a host of other aspects related to theoretical algebra. She taught, lectured and was considered a great mathematical mind by students and professionals alike, all without being paid for the first three year she was on the faculty.

Emmy was an outspoken pacifist and hated the German role in The Great War (WWI) and was glad when it ended. Shortly after the war, the Nazi government came into power and demanded that all Jews be thrown out of universities. Since this was Emmy Noether's heritage, this put her out of a salary she had worked hard to achieve. Her students were close with her and genuinely respected her value as an educator, so she kept teaching outside of the university. She even invited students to her home for lessons, regardless of whether they supported the Nazi regime.

When she was offered a job at Bryn Mawr College in Pennsylvania, the political and social situation in Germany was becoming even more hostile for Jews. She took the offer and left for the United States. Her work in representation theory was continued there and she even gave lectures weekly at Institute for Advanced Study, Princeton, about fifty miles away from Bryn Mawr. During this time, doctors found tumors in Emmy's uterus and she kept it secret except with close friends. In 1935, she had surgery to remove them, and four days later she died from an unexpected infection related to the procedure. She was so loved by those in her field, Albert Einstein himself wrote an obituary for her and sent it to the New York Times.

Noether's contributions to mathematics, physics, and abstract algebra were the product of her passion. In spite of a shortage in compensation, lack of respect and dismissal from her own government, Emmy continued creating theorems and advancing mathematics seemingly without any regard for her own recognition. Those that knew Emmy described her as full of laughter, generally aloof in regards to her appearance and fiercely excitable and passionate about her work. Emmy's heroism comes from the amazing things she did for science purely for the sake of knowledge and her own passion, whether it was her own research or through the hundreds of students whose minds and careers she inspired.