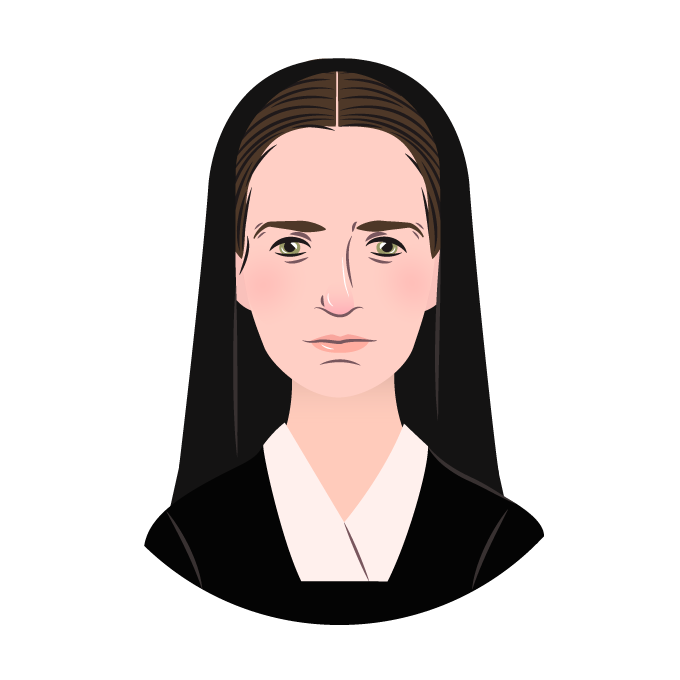 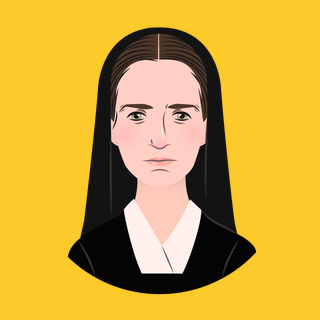 Sister Corita Kent wasn't just an artist, and she wasn't just a nun. She was a subtle instrument of change. Born in Iowa to Frances Elizabeth Kent to Robert Kent and Edith Sanders, her family moved to California when she was four (or five) and she attended a catholic school there. She loved designing and writing as a child, and when she was in sixth grade an art teacher took notice. She would give her private lessons after school. Her father further encouraged her to create original art.

At eighteen, she joined the Immaculate Heart of Mary Catholic Christian Community as a nun and took on the name Sister Corita Kent. During her training there she was asked to fill in for different teachers that were ill and at one point even sent to British Columbia for a few years to teach. She never saw herself as being a teacher and wasn't even trained for it like those she was replacing. This gave her a fresh approach to teaching that made her much more progressive in her later years as she would come to transform the Immaculate Heart of Mary art education program tremendously.

During her time teaching Sister Corita attended college courses at night and during the summers and earned a Bachelor of Arts Degree at rwenty-two. She earned her Master's Degree later in 1951, all the while teaching her own students during the day and taking courses during the summer breaks. She was made head of the Immaculate Heart College Department of Art and transformed it into one of the more progressive art programs in the country. Her students gained experience as staff for the art department by working on real, professionally commissioned projects from clients like IBM.

She learned the skills of serigraphy from Maria de Sodi Romero, widow of Alfredo Ramos Martínez (a famous muralist from Mexico). Her art career officially started in 1952 when her serigraph titled The Lord Is with Thee won first prize at the Los Angeles County Museum show, California State Fair, and subsequently many other shows — a success she hadn't expected. Her art continued to be successful and she made prints for Container Corporation, Reynolds Aluminum, and International Graphic Arts Society. For the 1964 New York World's Fair she designed a forty-foot mural for the Vatican Pavilion dubbed the Beatitude Wall.

Sister Corita's heroism comes from her brazen approach to art, education and religion. By simply writing letters to Charles Eames and Buckminster Fuller she was able to get them and Peter Yates, Virgil Thomson and other progressive artists of the time to interact with the Immaculate Heart of Mar Community and specifically the students. Dr. Alois Schardt, an art historian from Berlin that taught at the school and Charles Eames commented on and affected her art heavily. She pushed to do more with type and word juxtaposition on their encouragement.

In religion, she pushed for more individuality for nuns. Sister Corita was a part of a group that sought to change the style of the traditional habit that nuns wore. The modified form was more practical and less restrictive. She didn't set out to be a part of a feminist movement, but other communities were coincidentally sharing her sentiment about the rules and how they had been made by men who didn't have to adhere to them. In 1969, 300 other sisters broke off and formed their own noncanonical Catholic community. The year earlier, when Sister Corita had left to spend her summer in the eastern US, she decided not to return.

She spent the rest of her life in Boston, Massachusetts working on commissioned art and creating art as statements of peace. She was very open about her disdain for the Vietnam war and it appeared overtly in her art. She would juxtapose images from the war, like injured soldiers or the cover of Newsweek magazine, with quotes, words, or song lyrics. She was outspoken, but remarkably still humble, in her views about equality of the sexes, races and social classes. Her most famous pieces are the 1985 "Love" stamp and the very similar "Rainbow Swash" that appears on the Boston LNG tank.

Though her fame was unintentional, Corita Kent saw it as her duty to use it to be a role-model for adults and adolescents alike. She managed to be compassionate and critical, humble and successful, and perhaps most important of all, express her individuality without sacrificing her moral and religious principles.

In the Immaculate Heart of Mary College Art Department, Sister Corita kept these rules posted:
1. Find a place you trust and then try trusting it for a while.
2. General duties of a student: Pull everything out of your teacher. Pull everything out of your fellow students.
3. General duties of a teacher: Pull everything out of your students.
4. Consider everything an experiment.
5. Be self-disciplined. This means finding someone smart or wise and choosing to follow them. To be disciplined is to follow in a good way. To be self-disciplined is to follow in a better way.
6. Nothing is a mistake. There is no win and no fail. There is only make.
7. The only rule is work. If you work it will lead to something. It is the people who do all of the work all the time who eventually catch onto things.
8. Do not try to create and analyze at the same time. They are different processes.
9. Be happy whenever you can manage it. Enjoy yourself. It is lighter than you think.
10. "We are breaking all the rules, even our own rules and how do we do that? By leaving plenty of room for X quantities." - John Cage
HINTS: Always be around. Come or go to everything. Always go to classes. Read anything you can get your hands on. Look at movies carefully, often. Save everything — it might come in handy later. There should be new rules next week.